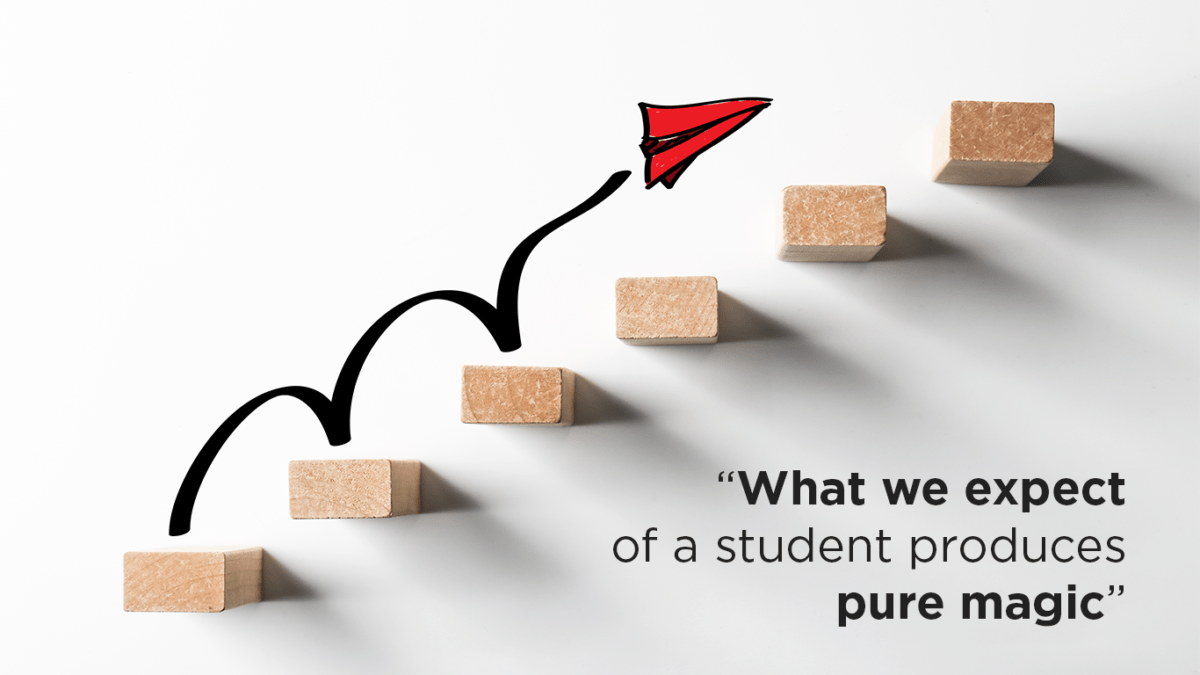 What we expect of a student produces pure magic.

George Bernard Shaw’s Pygmalion, that many of us older educators may remember by the sentimentalised musical version My Fair Lady, tells the story of a lowly flower seller who is taken on by the English professor, Henry Higgins with his particular interest in phonetics. He and his friend Colonel Pickering decide on an experiment by taking on the ragamuffin flower seller, Eliza Doolittle and teaching her to behave like a Duchess.

The experiment was a resounding success.  After intense elocution lessons, deportment guidance and new clothing to match her social standing – Eliza is unrecognisable when introduced to high society.

In 1968, psychologist Robert Rosenthal and school principal, Lenore Jacobsen caused a stir when they published their book, Pygmalion in the Classroom.

They had spent a year in an American school where they had misled teachers with fake IQ scores to believe that some of the students in their class were gifted.  With a change in perspective by the teachers, the students’ results significantly improved.  Interestingly – so did their IQ scores.

Rosenthal had prepared for this experiment by working with two groups of students and rats.  The first group of students were given tasks to do with the rats.  Before introducing the rats to the students, they made it abundantly clear that the rats had been selected because of their unique ability.  As a result the students’ actions towards the rats was affectionate.  This contrasted significantly to the second group who were given the disadvantaged rats.  Rosenthal’s hypothesis was seen in action.  When the rats felt stupid, they underperformed and some never even left the starting line.

Does the teacher’s perception of a student determine their performance?  It does!

This research comes after 30 years of intense synthesis of numerous studies by David Trouilloud and Philippe Sarrazin.

“In all this research, a self-fulfilling prophecy was demonstrated when a teacher’s belief or expectation of a student changed the attitude of the former towards the latter, who ultimately tended to conform to the teacher’s belief.”

The Three Stages of the Pygmalion Effect

How the Pygmalion Effect unfolds in the classroom:

When teachers look at the class list, read the reports on the student and analyse their results, they form differentiated expectations of them.

Here comes the problem.  Because all students are different (unique) it may explain their behaviour.  But, the research indicates that it is our anticipation that leads to special treatment. This is shown in the unique tasks assigned to the students we anticipate to be highly competent.  The teacher’s type of feedback and the emotional support given are all influenced by stage one – our anticipation.

The different treatment given to the students based on our initial anticipation changes the student’s outcomes.

Why does this happen?  It is all wrapped up in our perception.  Perception is a vital step in our development.  As the body grows in utero and early childhood, the bones and the muscles require movement as we discover our place in space.  Body readiness is an essential requirement for learning.  Before the body is ready to learn, it requires feedback from our senses.  The five far senses (sight, hearing, smell, touch and taste) and the two near senses (our vestibular system and the millions of proprioceptors on our skin) send data to the brain.  This data informs our PERCEPTION.  Our students use this data to determine their perception of the teacher’s belief in their ability to succeed.  They internalise that belief and it is made manifest in their results.

This makes teaching really hard.  But it is not as bad as it sounds.  We are human and it is natural to build up an image of a student and differentiate in order to meet their needs.  What we need to know is that the indicators that we use to make those choices are either good or harmful.  The three indicators all teachers must avoid is boas, false stereotypes and being too rigid.

Trouilloud and Sarrazin recognise four key states to make sure that we avoid the Pygmalion effect:

It is our responsibility as educators to teach everyone with equal passion and enthusiasm, not just the easy ones…because futures are at stake.